Linnea is the female choir at Linköping University. It was founded in 1997 and therefore celebrates it’s 20th anniversary this year.  The choir consists of about forty singers and the repertoir is varied, mostly music for four part women’s choir. The choir performs, on the one hand, at their own concerts and at parties and conferences, and on the other hand, together with their brother choir, Linköpings studentsångare. Through the years, Linnea has created traditions of their own, among which some of the most prominent, reccurrent ones are their Lucia processions on December 13, and the concert Ett knippe kvinnokamp (‘A bundle of fights for women’s rights’) on International Women’s Day, March 8.

Since 2009, the choir is conducted by Merete Ellegaard, Assistant director musices at Linköping University.

Kalmar nations kör (Kalmar nation choir) is a mixed choir of about 50 singers, located in Uppsala. The choir is a part of the student organisation Kalmar nation, one of the 13 student nations at Uppsala University, where we perform during dinners and balls, but also hold concerts and other performances around the academic world of Uppsala. We sing everything ranging from drinking songs from the 1500s in Latin to newly written Indian konnakol, and enjoys singing in many different languages. For the upcoming spring concert, we have a repertoire containing no less than ten different languages, including Georgian and Basque. This May in Oulu will be our second time at NSSS, and we can’t wait to meet you all and sing together again. 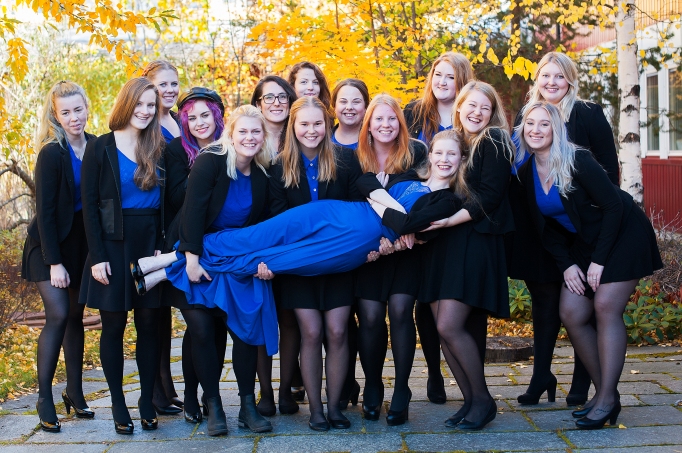 Kvinnokören Embla is a choir for female students at Luleå University of Technology. The choir was founded in 2011. At this point there was only a male choir and a mixed choir, a women’s choir was missing.  Today the choir has approximately 20 members who sing, party and have fun together. The repertoar  is a mix of 80’s disco, pop-hits, swedish schlager and folk music. 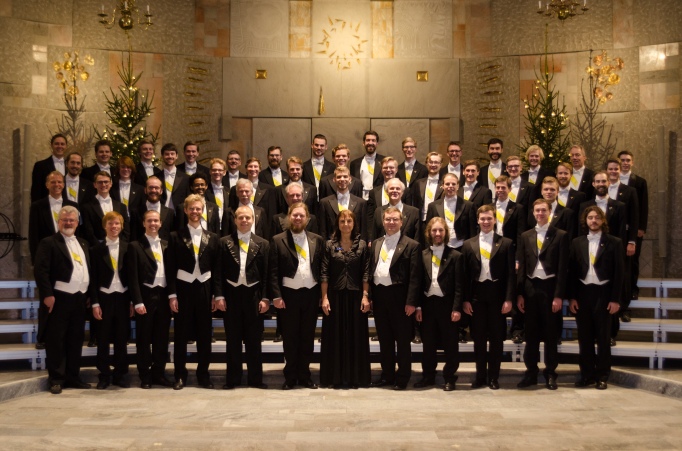 LINKÖPING UNIVERSITY MALE VOICE CHOIR (Sw. Linköpings Studentsångare, former Linköpings Studentsångarförening Lihkören) was founded in 1972. The choir has since then developed both musically and organizationally, and it is today regarded as one of the best male voice choirs in Sweden. The singers are recruited both from the university faculties and outside the university to keep the musical quality at highest possible level. Today, the choir consists of approximately 60 singers, properly dressed in tails. The choir has made many tours abroad, the latest to Macedonia in 2013. The goal is always to represent Sweden and our University as ambassadors and to introduce the very best choral culture that Sweden has.

In 1993 the choir, together with two other choirs from Linköping, won the national competition Körchansen which was hosted by Sveriges Radio, Svenska Rikskonserter and Sveriges Körförbund. In May 2007 the choir gained two first prizes at The Third British International Male Voice Choral Festival in Cornwall, England. The conductor was awarded the festival’s Conductor’s Award. 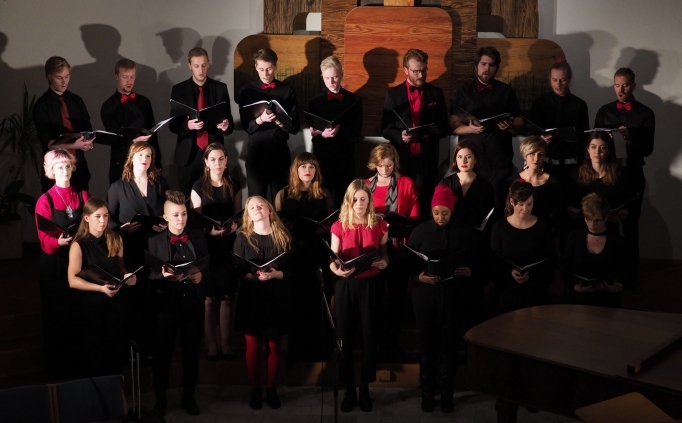 SKÖN – the Student Choir of Norrköping, is the best – and only – student choir on Campus Norrköping, belonging to the University of Linköping. We are a mixed choir of both students and alumni singing a variation of pop, classical chorus, traditional Swedish songs, international music and some less serious songs…

With the purpose to meet people through the joy and happiness of singing together and to share the love of music, our conserts consists of partly our own arrangements and texts and can be with or without instruments and choreography.

Now at NSSS in Oulu, we are celebrating our 18th birthday!

Snapsakademien is a proud young male choir with good vigour, housed at Luleå Technical University. The key word in the choir is camaraderie and a performance of Snapsakademien is always a set of comedy songs set in relation to traditional national romanticism.

We strongly believe that when we make an entrance our job is to steal the hearts of all the ladies and gentlemen of the audience.

Stockholms Akademiska Damkör (Stockholm Academic Female Choir) was started in late 2013 initiated by Stockholm Academic Male Chorus / Stockholms Studentsångare and their conductor Pelle Olofson, also conductor of the female choir. Today the choir consists of around 40 active members and the repertoir is broad, from profane and sacred to modern and folk songs.

The choir has recurring concerts each year in both spring/summer and fall/winter and also appears occasionally together with their brother choir in mixed choir song.

Stockholms Studentsångare (Stockholm Academic Male Chorus) was founded in 1905 and is one of Sweden’s leading male choirs. Today the choir has 53 active members consisting mainly of academics of all disciplines; both students and graduated.

The repertoire is very broad and rooted in all parts of the male chorus literature: old and new; profane and sacred. Recurrent events in the activities of the choir are the yearly spring and christmas concerts, performance at the graduation and installation ceremony at Stockholm university, performances at Stockholm City Hall, CD productions, performances on television, tours and much more…

Sällskapet CMB (The Fellowship CMB) was founded on a cold january night in the year of 1985 and was the first male choir of Karlstad högskola. The fellowship named themselves Carlstads Manskörsbröder, so that the choir would use the same initials as Carl Michael Bellman. His songs and epistles was, and remain to this day, a integral part of the choirs repertoire.

Today the choir has around 30 active members whom are mainly students or alumni at Karlstad University. We sing everything between heaven and earth with a sprinkle of Bellman on top, all under the leadership of our conductor Ingela Johansson.

Söt Likör, is a student choir for females at Karlstad university. The choir was founded in 1987 and are therefore celebrating 30 awesome years this autumn.

Since the start, the choir has worked to enrich the daily lives of the students at Karlstad University. as well as inviting the people of Karlstad on musical experiences of high quality and wide range. Our repertoar is a mix from traditional folksongs to pop and popular music.

Besides singing we like to spend much time together. In addition to the rehersals, singing and concerts we also have a lot of “sittningar” (dinners) and other activities you do not want to miss out! Söt likör is a female choir, but we also sing in mixed repertoire, together with CMB, our male counterpart at the University.

The Västgöta Nations Manskör Korgossarna (Västgöta Nation’s Male Choir), or usually referred to as “Korgossarna”, is a medium sized academic male choir based in the university city of Uppsala, north of Sweden. Korgossarna is an historic institution, praising music and the art of singing for hundreds of years. Some scholars have even described the choir all the way back in the 1630s. Though, in 1992 the choir aspired to get more organised and initiated a new era that would last to this very day and onwards.

A lot of things as happened since 1992. Today, the choir is characterised for its academic sense of humour combined with advanced music arrangements and interesting interpretations. The musical core of Korgossarna is to treasure the male student singing heritage, founded in the heart of Sweden during the 1800s, and to further find new riches in modern and specific composers specially arranged for male voices.

The choir is ambitious and strives to take part in choir festivals and competitions around the world. The latest competitions have been successful events with victories such as “Saint Petersburg Grand Prix” (2011), “Krakow Choir Festival” (2013) and a three-time victory at ”In Canto sul Garda” (2015).

Since 2015 Korgossarna has had the honour of being led by Rebecka Gustafsson.