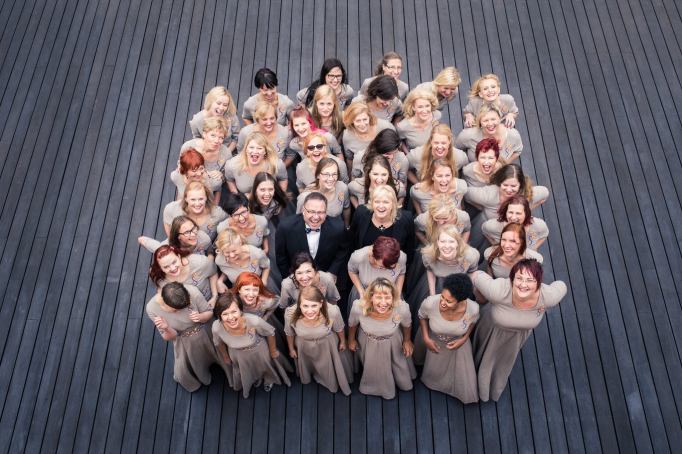 The Academic Female Choir of Tallinn University of Technology was founded in 1951 and is one of the most successful and oldest female choirs in Estonia. There are nearly 60 members full of positivity and perseverance. Since 2012, the conductors are Aivar Leštšinski and Jana Perens, both incredibly committed and professional.

The repertoire has been very diverse over the years – from folk to jazz, including classical choir music and modern compositions. The choir has released CDs for its anniversaries. Also, the choir has always been very open-minded about co-operation with other choirs, musicians, composers etc. As a new tradition for a few years there have been concerts with different Estonian girls’ choirs.

The choir takes part of song festivals, various competitions and holds several concerts each year. Our recent achievements include a golden and a silver medal from Festival Coral de Verão in Lisbon (2015) and a golden diploma from Pärnu International Choir Festival (2016). In November 2016 the choir celebrated its 65th anniversary with three artistic concert performances “Sõnum”.

The choir was created in 1966 by the best singers of the time from the male and female choir of Tallinn Technical University (TPI). The members of the choir are mostly students and graduates of Tallinn University of Technology. Through the years the chamber choir has taken part in many festivals and contests in Estonia and elsewhere in Europe. The goal of The Chamber Choir of TTU is to constantly progress and discover new sides to music and choral singing while trying to find new interesting outputs through different projects, travels, and contests and while doing so uphold and introduce the Estonian culture of choral singing in our homeland as well as abroad. Besides Estonian choir music there is also a lot of modern foreign production in the choir’s repertoire. The choir holds several artistic concerts anually at different locations across Estonia, regularly takes part in youth song and dance celebration as well as the song festival, and takes part in “Gaudeamus” – the song festival of students. The Chamber Choir of TTU has joint events with other collectives of extracurricular activity as well as other student organizations across Estonia. Since the autumn of 2014 the choirmaster of the chamber choir is Ksenija Grabova and in 2016 two fine assistant conductors joined the choir – Merit Männiste and Laura Kruusamägi. 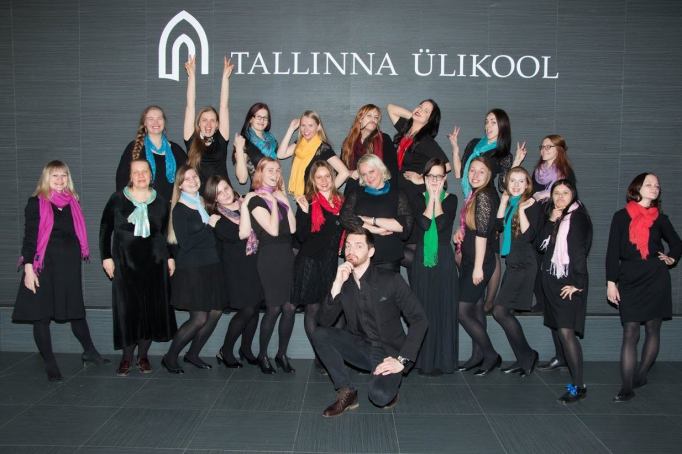 Female choir from Tallinn University is a youthful choir with a long history. Next year we’ll be celebrating our 70th birthday. Our repertoire consists of both modern and traditional music. Tallinn ladies are always ready to rock!

Extra fun fact: Our conductor Rasmus Erismaa is a professional singer and belongs to famous a capella group Estonian Voices.

Tartu Academic Male Choir is the oldest consistent men’s chorus in Estonia. In 2012, the choir celebrated their 100th anniversary. The purpose of the choir is to unite singers with an academic background in friendship and music, always trying to aim higher on artistic levels. TAM consists of students and academic staff of the University of Tartu and the Estonian University of Life Sciences, as well as men from various other walks of life, all together about 45 currently active members.

TAM’s musical repertoire is quite versatile – Western choral music and Estonian male voice choir classics, but also lighter pieces spiced with coreography are performed, folk music arrangements have their own special place in the repertoire. A lot of our music is composed by the choir’s own conductor Alo Ritsing. The most important events for TAM are annual Christmas concert with the Academic Women’s Choir of the University of Tartu and the spring concert at the end of term. Of course, the choir would always participate in Estonian song festivals, Nordic Student Singers’ Summits and Gaudeamus – a festival for student choirs of the Baltic states. Every now and then, TAM also travels abroad – one of the most highlighted trips took the choir to far away Japan in 2014 as a first men’s chorus from Estonia to date.

Recent achievments: in 2011 our choir earned the second place at the international choir competition in Berlin, Germany. In the next year TAM was awarded with “Choir of the Year 2012” title by Estonian Choral Association. Our head conductor Alo Ritsing got the “Conductor of the Year 2012” title at the same event. In 2013 TAM won the second place in the highest category at the male voice choir competition organized by Estonian Male Voice Choir Association. In the spring of 2016, TAM won the first prizes at male voice choir and folk music categories at the 13th International Choir Competition and Festival in Bad Ischl, which resulted in us being elected to participate in the Grand Prix concert event as well. Our maestro Alo Ritsing earned the best conductor’s co-award.

The choir’s patron and main benefactor is the University of Tartu. The academic influence is found in our traditions, repertoire and contribution to the society. At the same time, our youthful spirit constantly yearns for new challenges and therefore TÜAN has found itself more and more challenging the boundaries of choral music as a field of art.

In 2015, TÜAN celebrated its 70th anniversary with a concert-performance ‘Green.House’ – wearing black trash-bag dresses, we sang and spoke about what is fake and what is genuine. A year later, we took part in a play produced by the theatre Must Kast. We had 11 successful shows where we embodied the Landscape that acted as a link between the protagonists, the Girl and the Swamp, and the other characters of the play.

This year is very colourful for us. In August we had 2 long workshops with a Gregorian chant specialist Jaan-Eik Tulve and with a rhythmic movement specialist Paul Bobkov. In September we participated in a project for recording choral music for a new collection of the Estonian Public Broadcasting. During the autumn semester we had an English guest conductor Benjamin Theophilus Martin Kirk working with us to prepare 4 concerts. This spring, in May, as the initiator of the Estonian Budding Choral Composers’ Programme, TÜAN is hosting its gala concert. At the moment we are also preparing Duruflé’s ‘Requiem’ with Tartu Academic Male Choir for Kuno Kerge’s Master’s concert-exam. In summer we celebrate the 10th anniversary of our conductor’s choirs’ Singing Days, and we are very excited for the lovely Youth Song Celebration concert at the beginning of July.

From its foundation, the choir has participated in every Estonian Song and Dance Celebration, and has been one of the initiators and tradition carriers of the Baltic Students’ Song and Dance Festival ‘Gaudeamus’.

If we add the social events of the Estonian student choirs and the other times we spend with our sibling choirs, friends and each other to our purely musical activity, we can say that singing in a student choir really is a fulfilling lifestyle! Music for the soul and friends for life – this is TÜAN!

Our conductor Triin Koch (b. 1975) has been directing the choir since 2005. She also conducts Tartu University Chamber Choir and our Tallinn alumni choir. In recent times, Triin has been working with us on Estonian contemporary choral music, mainly for our last CD and the Budding Choral Composers’ Programme. Her heart, nevertheless, belongs to the Estonian choral music of the National Romantic era. Her concert programmes are known to be well-composed and well-balanced sets that have repeatedly earned praise at choir competitions and festivals both at home and abroad. Looking for different colours and timbres is what she loves most about her job. Triin Koch is the artistic director of the international choral competition ‘Tallinn 2017’, a member of the jury of the Budding Choral Composers’ Programme, and the leading conductor of the girls’ choirs at the Youth Song Celebration coming this summer.

In 2013 and in 2015 our choir was rewarded with the 2nd price in the A-level category during a prestigious local choral competition for the mixed choirs, “Tuljak”. The choir was given the 3rd price at the 14th International Choir Festival “Tallinn 2015”. The choir was awarded Grand Prize at the 13th Estonian Chamber Choir Competition, which took place on 8-9 April, 2016. In July 2016 the choir took part in a high-level Béla Bartók 27th International Choir Competition (Debrecen, Hungary) where it was rewarded with the 4th place.

From September 2016 to January 2017 the choir was conducted by a guest conductor, Lodewijk van der Ree, from the Netherlands.

The Academic Male Choir of Tallinn University of Technology (TAM – Tehnikaülikooli Akadeemiline Meeskoor in Estonian) has been active since 1945 and is the biggest male-voice choir in Estonia. It is a vibrant organization with close to 100 active members – students, faculty or alumni of the university – and more than 1200 alumni. The chorus, with its high musical standard and active social life, has a diverse repertoire ranging from classical a capella choir music to atonal music; from jazz, pop-music covers and contemporary music to folk songs. The choir is conducted by Peeter Perens and Siim Selis – the cream of the crop amongst Estonian choir conductors. The choir has provided 70 years of challenge, entertainment and pleasure for the singers, their families, and the public at large.

TAM has a vast collection of recordings, from audio-tapes and vinyl LP-s released in the old days to numerous CDs and DVDs. The chorus has also taken part in various competitions and has been awarded with many prizes from around the globe.

„Emajõe Laulikud“, a female choir from Tartu, Estonia, has been singing under the baton of Vilve Maide together since 2003. In quite a short time the choir – which can be characterised as full of joy, personality and courage to act differently and seek innovative pathways – has become one of the outstanding female choirs in Estonia. Since 2010 Mariell Piispea has assisted the conductor.

The repertoire of the choir is in permanent development, ranging from arrangements of folk songs to opera choirs, from church music to pop-music.